Microtones manifested in real form at the Cervena Barva Press table, Gloria Mindock beaming (what an extra-ordinary editor…and human being!) Melanie was one of many writers at AWP who generously got a copy of my first book, and said, with that pervasive twinkle in her eyes, “I’d love to review this!” I remember thinking, ‘yeah, right!’ It was so far from any previous experience I’d had. Well, here it is! Melanie sent to me her astute observations and insights about Microtones, and here is her entire review: Melanie Page- MICROTONES I regret that I didn’t read this book sooner. Honestly, it’s a chapbook that I got in March at AWP 2013, which was followed by a train ride lasting over 24 hours. Okay, I get motion sick, which is why I listened to a Junot Diaz e-book. Instead, I read the whole thing while waiting for my BBQ chicken dinner to bake. That easy! Some works in this chapbook are flash, others are poetry. I lean more toward fiction myself, which is probably why I liked those pieces more. The ones that stood out as my awesomest-favoritist were “Stand Here,” a piece that describes the descent of a relationship NOT in dialogue or feelings, but simply where the person was physically positioned (COOL!); “Recollection,” which captured an entire life in maybe 100 words–what’s he guilty of, what does the wife know, why is the pastor so forceful!–; “Buried,” about two women who are pregnant and waiting for their baby-daddy to come home, though he most likely died in combat–the women were soldiers, too, until they both became with child; and “Wrestling with Genetics,” a super shorty with a father/son duo battling out drinking, driving, and the macho attitudes that can lead to such a decision. Flash fiction is painfully hit/miss and can totally deceive young writers. Some see it as a platform to describe a scene, and we get something like a photo. Others see the flash as a place to rant a bit on his/her personal views. The flash needs to be a WHOLE WORLD, a life, in few words. Vaughan does it about 100 or less. Amazing! Example: “Most people don’t like a sarcastic cancer patient actually,” I said. Aunt Sally replied, “Well, most people don’t have cancer.” I drove her to her chemo treatments on Mondays, my day off. This was her third round. I turned up the radio. She re-applied her lipstick, turned it back down. “And what’s so bad with a little sarcasm every now and then?” Here we go. “Saved your Uncle Tony’s and my marriage. Maybe you shoulda tried a little sarcasm with your ex-wife?” I turned the radio back up. (from “A, B, C” in Microtones) Don’t you just wonder about the relationship between these two? They seem incompatible, but they are together every Monday to help Aunt Sally avoid death. Where did she get her attitude about sarcasm in the first place? What really happened between the narrator and his ex-wife? These are areas in which a reader can dream. We’re fed enough to be satiated–to get a whole situation and some history–but are left room to explore. Robert’s note post review: Thanks so much, Melanie, for making this Saturday unique and fantastic! For more information about Microtones, and to order the book at Cervena Barva Press: The Lost Bookshelf       ]]>

We, two FlashMob contest winning stories! Great fiction, poetry and flash fiction! Just the book reviews are stellar. Plus, check out Meg Tuite’s new “Exquisite Duet” column, hosted at JMWW for the first time! Thanks editor-in-chief Jen Michalski for this adventure, and my flash cohorts, Michael Maxwell and Bud Smith for their editing skill and finesse. jmww.summer.2013]]>

Metazen!!! Thanks so much to editor, Christopher Allen, and also Frank Hinton. And to everyone else who gave me feedback in shaping this piece: I salute you!  ]]>

A hearty thanks to editors Erin McParland, Aaron Dietz and Bud Smith- you all rock! I can’t wait to hold this amazing collection in my hands this fall.]]>

Winners | FLASH MOB 2013 Also, if you’d like more entertaining stories, the entire group of talented writers, and judges who submitted are here: Let the mob begin! | FLASH MOB 2013 And finally, my deepest thanks to the originators and idea mentors behind this superb project: Linda SImoni-Wastila, Christopher Allen and Michelle Elvy. So grateful!  ]]>

jmww.spring.2013 I also edit all of the poetry and flash fiction for Lost in Thought magazine. Originated and conceived by editor-in-chief, Kyle Schruder, Lost in Thought is a gorgeous print magazine, combining stunning visual images (Kyle handles all of the artists and does layout, design, and publishing) and we are so fortunate to find amazing writers. And now we have this review at NewPages.com of our last issue of Lost in Thought: Literary Magazine Reviews :: NewPages.com :: June 2013 Kyle and I are currently working on Lost in Thought 5, which will be out later this summer. We’re always open to reviews, or blog mentions. Any coverage helps get our magazine into more readers’ hands. Here is our Facebook page: Lost In Thought    ]]>

Songstresses: Moving Lyrics Into Poems. The project originated a few months ago when writer Joseph Quintela asked several friends to contribute to his Working Definitions project. You could select any word, (sometimes he would provide a list), and re-define them using poetic terms. Then, JQ created a Word Poeticizer, in which you could select a line, or phrase, or a lyric (I used several for Songstresses), and feed them into the Word Poeticizer, and out popped a completely different poem! Then I edited, and re-edited, altering the phrases and embellishing to make them “my own.” And voila! I hope you enjoy “Aretha,” and thanks editor Mike Joyce for the incredible support, and Felicia Simion for the lovely accompanying artwork: Aretha by Robert Vaughan | Literary Orphans Also in the Wordsworth issue, my good friend John Riley reviews Microtones, with aplomb. Very grateful to John for this: A Review of Robert Vaughan’s Microtones by John Riley | Literary Orphans And while you are here, check out stunning and diverse writing by Amanda Deo, Misti Rainwater-Lites, Matthew Burnside, Tantra Bensko, Kenny Mooney, Joel Kopplin and more: Photo Content Page: Wordsworth | Literary Orphans]]>

Microtones with her recently, I said SURE! I knew it could be hilarious, but had no clue just how much fun! You can read all about it at the HOUSEFIRE site: HERE IS WHAT I REMEMBER MOST + Megan Lent interviews Robert Vaughan | HOUSEFIRE I’ve had the honor of being published a few times at HOUSEFIRE, some of my most kooky, experimental pieces. Like “METEOR.” I am also fortunate to have a strange piece included in HOUSEFIRE’S first anthology: 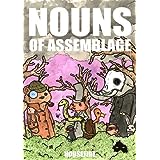 NOUNS OF ASSEMBLAGE: Riley Michael Parker: 9781937395001: Amazon.com: Books All in all, I’m grateful for this opportunity, HOUSEFIRE. And Megan, thanks a ton! We have to meet and eat our favorite pies in some sleazy diner. Fo sho’.]]>

Microtones is up at the Small Press Book Review, written by Jake Goldman, and I was referred to him by my buddy, Mel Boswell. One of the poems in Microtones that Jake refers to, “Turbidity,” I wrote in Boston when I went to read for Timothy Gager’s Dire Literary monthly reading series in April 2012. I was having my morning coffee, and it was Easter Sunday, and surrounding me at that Somerville Starbucks were students, housewives, drifters, single men; people who, for various reasons, were NOT celebrating this traditional family holiday. So, the first stanza of “Turbidity” came easily: Holidays are hard I’m going to take a walk, escape the silence of this house… Goldman also refers to three other poems in Microtones, and provides the reader an exquisite glimpse into what Jake calls “a balanced and focused work and one that calls for multiple reads.” I am very grateful to Jake, and Mel for this profound interpretation of my first collection from Cervena Barva Press: The Small Press Book Review : Review of Robert Vaughan’s MICROTONES 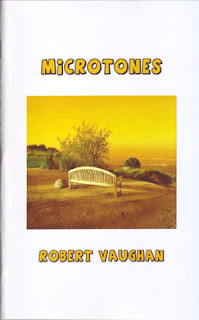